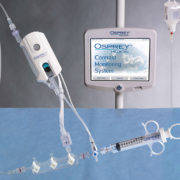 Osprey Medical today announced that it has received US FDA 510(k) clearance for its advanced DyeVert™ PLUS Contrast Reduction System. This new platform augments Osprey’s current technology with the capability to actively manage dye administration during coronary interventions.

DyeVert PLUS received European CE Mark in 4Q 2016. The company further validated its dye savings capabilities through initial market testing with multiple physicians in Germany and Italy, which showed a 44% contrast reduction. The product received strong positive feedback on the utility of real-time contrast monitoring and ease-of-use.

Osprey Introduces DyeVert PLUS at TCT